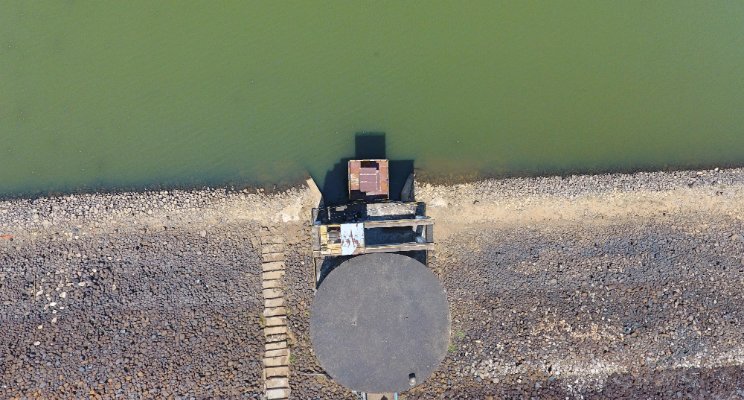 The present work is part of a wider project that aims at the restoration of dams in Maharashtra State through integrated analysis with UAV technologies for the fastest results.The task was to collect data for massive 1300 hectares of the catchment area for calculation of silt deposit at the bed.

UAV technology represented a valid method of providing information for the assessment of the vulnerability of embankment dam, considering the restoration process in complex situations.
In this perspective the level and silt deposit assessment in the Dina Dam, located at an altitude of 231 m above sea level in a plateau region near Nagpur, Maharashtra. Dina Dam, in fact, in addition to the individual economic value, have an ecological value which must be protected as a whole.The collected data will provide information on the spatial distribution of the hydrogeological phenomena assessment in the area.

Surveying the river and dealing with water reflection was one of the most challenging tasks as the camera calibration doesn’t work well with sun reflection.

Creating the flight plan also became a challenging task due to lack of accessibility to the ground surface and adverse weather was there as usual. We created the flight to cover the maximum part of the difficult terrain in the least battery usage setting with a 75% lateral and 65% longitudinal overlap and the camera set to take images at nadir position. These settings ensured all relevant features were captured.

We took our first flight at 6:30 am as conditions were calm with little or no wind and good light conditions for the imagery to be taken. An early survey would minimise any reflection issues that may have been experienced on the surface of the water if the sun was directly overhead i.e around 12 o’ clock. The total survey took approximately 300 min of flight time.

A period of ground truthing was carried out once the imagery had successfully been captured. The collection of ground-truth data enabled calibration of remote-sensing data and aided in the interpretation and analysis of what was being sensed. This was done by walking the river banks and noting characteristics along the water surface. Photographs were also stored as a reference. Our team spent 20 minutes carrying out an initial rapid processing of the imagery to ensure that the images were suitable and the entire survey area had been captured to avoid revisits.
However, despite our best efforts to minimise the reflection of the water surface, there were issues during the classification of the imagery. Therefore, in order to reduce the reflection, each image was individually analysed and a selection of the best images chosen and processed.

The project was then divided up into 500-hectare sections each and the data recalibration was done, based on each section. This gave more accurate results for detecting GCPs, especially when running a pix4d process.

Once analysed and processed, the images were passed on to the client in an orthomap format. Statistics on catchment area and levels were also examined precisely and passed to the client.

The imagery was divided into specific streams of the river with each land class division based on its directional. Using the specialised camera, the silt deposit at the bed was detected and classified which was particularly effective along the dam, the raised beds of sediment displayed contrasting spectral values compared to their previous level data.

Once the contour had been generating and levels were analysed, it was imported into a recent version of AutoCAD for further detailed analysis. The GIS study of the data collected by Aerizone allowed the areas of these silt deposits to be accurately calculated providing the client with exactly the information it needed to plan for further earthwork and excavation.

Aerizone’s UAV based assessment was the perfect solution for this project enabling us to generate results in a range of formats in an efficient and user-friendly manner.

With our earlier experiences flight plan, flying and landing can be done in a sinlge day leaving plenty of time for post processing. The UAV technology has so much potential and at Aerizone we have a team that’s very enthusiastic as to explore all the potentials of a UAVs for projects of vast scale.

« Drone Technology in India | When To Use Ground Control Points »